Skip to main content
Important Notice*
The MRI Brain Atlas designed to use Flash Player will no longer function beginning on January 12, 2021, as Adobe has stopped supporting the Player and will block Flash content from running. We are actively working on a new version of the MRI Brain Atlas that will roll out soon. Your feedback is always welcome, and you may contact us through the CONTACT page.
How To Use The Interactive Interface
This program uses mouseover interaction; use your mouse to roll over objects, if the arrow becomes a hand icon, you may click on that object to reveal an anatomical term or click on a button to advance through the program.

Abbreviations
Topographic Divisions
The Topographic Divisions of the brain are defined according to their relation to the AC-PC line, a line drawn from the upper surface of the Anterior Commissure (AC) horizontally to the Posterior Commissure (PC) in sagittal view. The MRI scan in this Atlas is that of a 31-year-old healthy male with no history of abnormal neurological condition. It is one of ten MRI scans of healthy individuals; obtained with IRB approval to study the anatomical correlation of the brain with MRI scan, taken in a 3Tesla scanner.

Mid AC-PC point: A point just in the middle of the AC-PC line. This point can be considered as 0 point where axial, coronal, and sagittal planes cross.

Axial Plane: is at the level of AC-PC line, dividing the brain into:
Axial Vertex (AV) and Axial Base (AB)

Basal Plane: is parallel to Axial Plane, separating the Axial Base (AB) from spinal cord.

Coronal Plane: is perpendicular to the axial plane and goes through the mid AC-PC point, dividing the brain into:
Coronal Frontal (CF) and Coronal Occipital (CO)

Sagittal plane: is between the two hemispheres, dividing the brain into:
Sagittal Left (SL) and Sagittal Right (SR)

The second half is included to conceptually help localization of a lesion on MRI scans of the brain or when one is working in supine, lateral, or prone positions during intracranial operations.

The additional smaller views help orient the user in the 3-dimensionality of each section.

The Topographic Divisions of the brain are defined according to their relation to the AC-PC line, a line drawn from the upper surface of the Anterior Commissure (AC) horizontally to the Posterior Commissure (PC) in sagittal view.The following examples help indicate what the abbreviations represent. 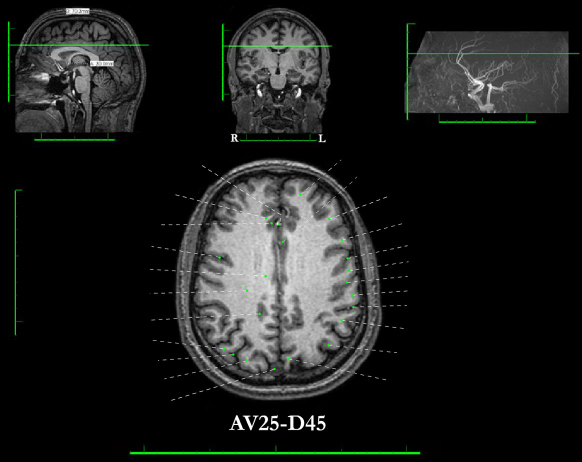 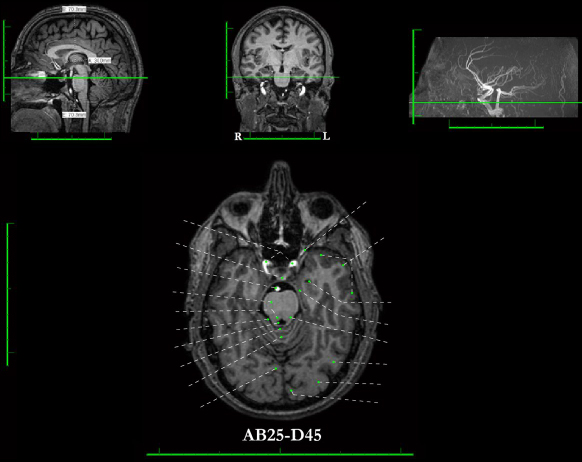 In Axial Base sections: AB25-D45 is the abbreviation of Axial Base: 25mm from the axial plane, with a Distance of 45mm from Basal plane. 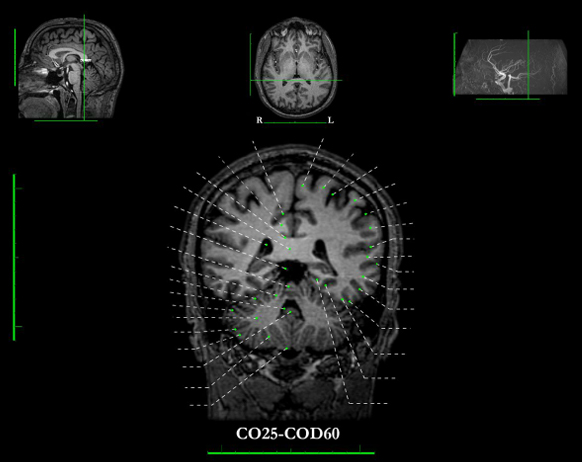 In Coronal Section: CO25-COD60 is the abbreviation of Coronal Occipital: 25mm from the coronal plane, with a Distance of 60mm from the most posterior end of occipital cortex. 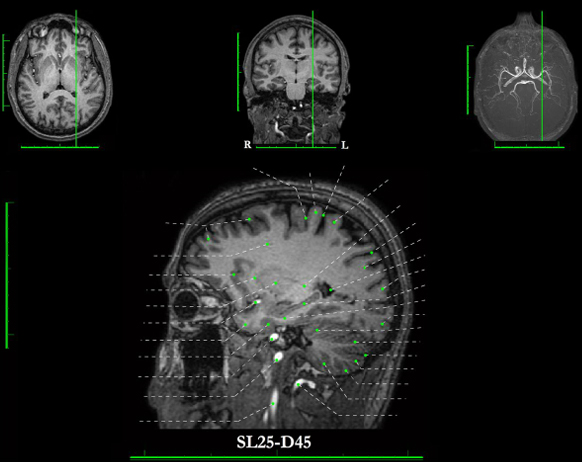 In Sagittal Sections: SL25-D45 is the abbreviation of Sagittal Left: 25mm left of the sagittal plane, with a Distance of 45mm from the most lateral extent of the left cortex.
JHP MRI Atlas of the Brain 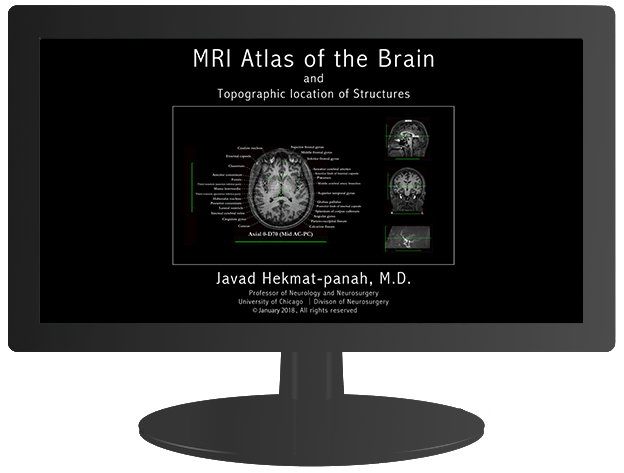 This work is licensed under a Creative Commons Attribution-NonCommercial-NoDerivatives 4.0 International License.

The Website Was Designed and Developed by the Research Computing Center - The University of Chicago Copyright © 2021. All Rights Reserved